Sauleda launches Green, the first fabric that cleanes and purifies the air by means of photocatalysis

Through the solar action, toxic particles are able to be eliminated in suspension such as dust, smoke, mold or nitrogen dioxide, one of the most harmful gases in the atmosphere. It is estimated that 4m2 of this type of fabric is equivalent to removing a car that has been traveling for a whole year.

Sauleda and Pureti, NASA's technology partner, have just launched Green®, the first ecological solar textile on the market. This technology aims to create a positive impact on the environment, by purifying and cleaning the air, to improve people's quality of life.

The fabrics with the Green® finish are sprayed with a mineral preparation based on titanium dioxide (TiO2), capable of removing dirt and toxic particles in suspension through the use of sunlight. This process is known as photocatalysis. Like photosynthesis, thanks to sunlight, it is capable of removing CO2 to generate organic matter, photocatalysis eliminates common pollutants in the atmosphere such as SOx, VOCs or NOx, through an oxidation process activated by sunlight. The fabrics developed by Sauleda, in collaboration with Pureti, carry out this photocatalytic process continuously, purifying the air, eliminating odors and staying cleaner with half the maintenance of a normal fabric. 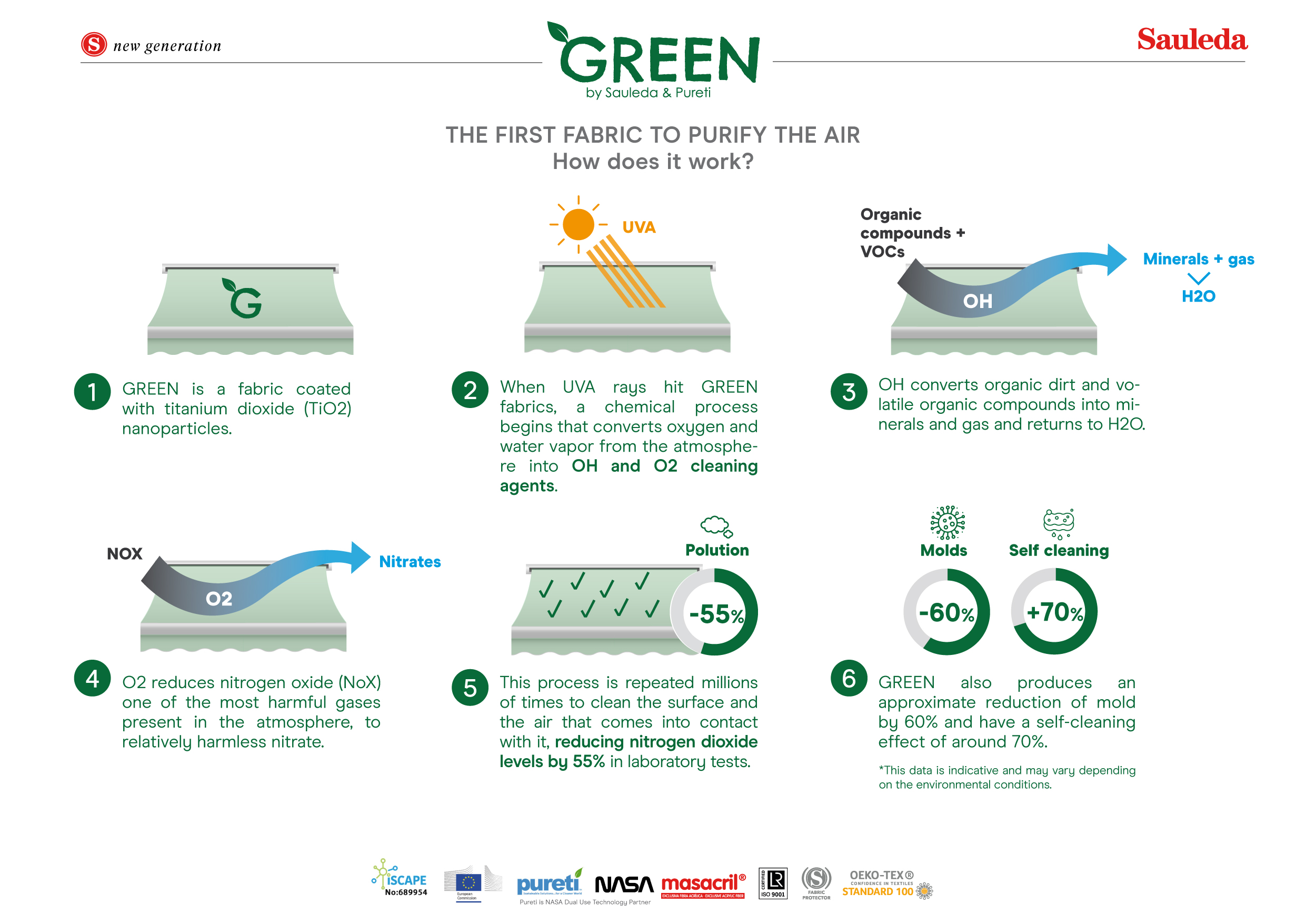 How does the photocatalysis process work on Green® fabrics?

The process begins when UVA rays hit Green® fabric, which contain mineral preparation based on titanium dioxide. At this time a chemical process begins in the fabric that converts the oxygen and water vapor present in the environment into cleaning agents: Hydroxide (OH), a powerful disinfectant, and Superoxide (O2). OH converts dirt and volatile organic compounds such as dust, smoke or mold into minerals and gas, which, in turn, are transformed into water vapor.

O2 reduces Nitrogen Oxide (NOx), one of the most harmful gases that exists, transforming it into relatively harmless salts. The sun's rays are essential to carry out the photocatalysis process, so it is in fabrics such as awnings where the purifying capacity of gases such as NOx is maximized. This is mainly produced by the combustion engines of vehicles. In this way, it is possible to calculate that 4m2 of a Green fabric is equivalent to removing a moving car for a whole year.

Sauleda and Pureti, partners committed to the environment

Sauleda has the ISO 9001, the STANDARD 100 by OEKO-TEX® and the REACH STANDARD that guarantee that your fabrics are made without any harmful substance that could be a danger to health, skin and the environment. Furthermore, Pureti has won the iSCAPE project of the European Union that aims to decontaminate European cities with photocatalytic technology and is recognized by Horizon 2020 as one of the ten projects that will configure the EU in the next sixty years.

“The strategic alliance to launch this new global ecological patent with Pureti, with which we share the same values ​​and commitment to the environment, is the natural path of both companies to offer a product that is not only sustainable, but also beneficial for people's health, ”says José Sauleda, President of Sauleda.